Counting back from the end
Gary Schwartz

In March 1993, at a chance encounter on the floor of The European Fine Arts Fair (TEFAF) in Maastricht, I heard myself utter these words: “Annelette, if my doctor told me I had six months to live, I would go to the Isle of Bute and publish that incredible kunstkamer painting by Guillam van Haecht that only I know about.” Listening to myself, I could only wonder what was wrong with me. If I knew what mattered that much to me, why in the world hadn’t I done it in the long quarter-century since I had made the discovery? Was I waiting for that talk with the doctor? Why shouldn’t I always be doing what is most important to me?

Annelette Hamming was the gifted editor of the Dutch art magazine Tableau, for which I had just written an article on another kunstkamer painting. The term is attached only to paintings of real or imaginary art collections made by a handful of Flemish masters working in Antwerp and Brussels in the seventeenth century. Every art historian loves them. I would have written a Ph.D. dissertation on van Haecht, especially on the meaning of the choice and arrangement of the objects in his paintings, had my supervisor at Johns Hopkins University, Adolf Katzenellenbogen, not died in 1963 at the age of 62, and had his successor, John White of Manchester, not been so obstructive (“I don’t beLIEVE in iconography.”).

And so, in the Summer 1996 issue of Tableau, my article “Love in the kunstkamer” came out. It continues to mean a lot to me, for itself and as a kind of surrogate for the dissertation that I had not completed. There is also an ineradicable, sad sense of mortality attached to my research. In order to gain access to the van Haecht, in a legendarily reclusive collection on an island off an island, I needed an introduction to the Marquess of Bute. Fortunately a good friend of mine, John Walsh, then director of the Getty Museum, was also a good friend of John Bute. An invitation materialized. The ferry ride from Wemyss Bay, west of Glasgow, to Rothesay took only a rocky half hour. My wife Loekie and I were picked up at the dock by a castle chauffeur who also gave a ride to two museum men who edited the Journal of the History of Collections and who like us had an appointment at Mount Stuart. At the house we were received by Jennifer Bute, who asked us to wait in a large, sunny reception room hung with eighteenth- and nineteenth-century paintings of the hunt and horse portraits. When the door closed on us, we experienced a silence more enveloping than we could remember ever experiencing. The painting was brought in and left to us until lunch. Of that lunch I have one pungent and painful memory. Jennifer, who had a wine import business, poured vintage Bordeaux for us at table, saying that John could no longer tolerate younger wines. He was in the final stages of cancer and was to die shortly later, 60 years old.

Were these early deaths on my mind when I made that remark to Annelette? I was 43 years old and although still feeling immortal I must have been thinking about death. 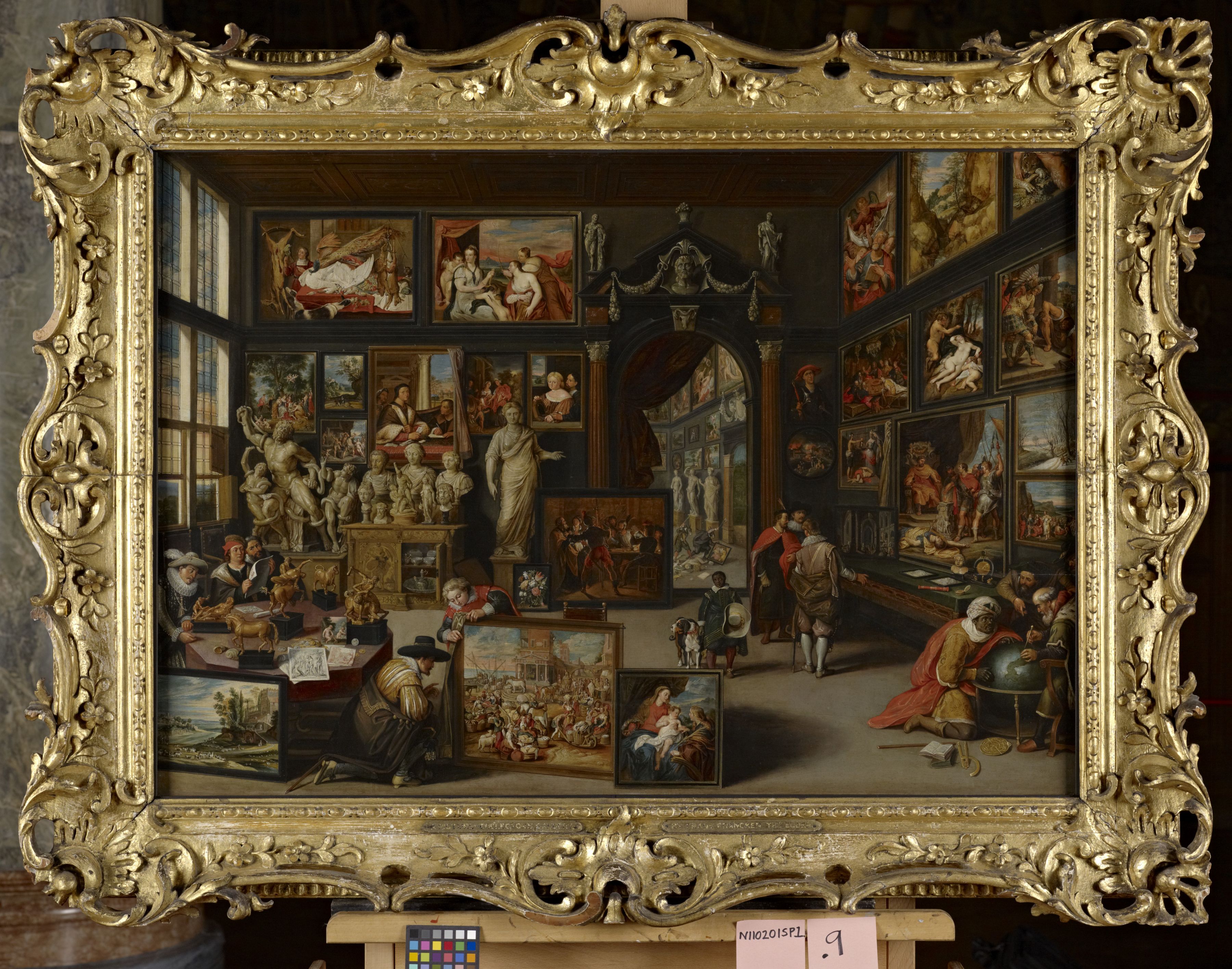 But it was love that preoccupied me more. What I showed in the article is that those wealthy Antwerp amateurs were indeed, as the word says, lovers. The article closes thus: “Love of God, love of art, self-conceit, love between the sexes: Guillam van Haecht found them all in the kunstkamer.” This is exemplified in the key painting within the Bute van Haecht. St. Catherine is tormented by love for the baby God, love that is unrequited (he tells her she isn’t beautiful enough for him) until she is baptized. After undergoing that ritual, Jesus puts a wedding ring on her finger, a ring that in some versions of the story was his own foreskin. Anthony van Dyck’s painting is a testimony to the emotional, physical and esthetic components in divine worship. Guillam van Haecht compounds the message, bringing in classical antiquity, occult mysticism, science, Flemish daily life and in the adjoining background space the depredations of iconoclasm, committed by people who deny that love of art could serve love of God.

My remark to Annelette took me back to Baltimore, Utrecht and Manchester in the mid-1960s, and propelled me to the Isle of Bute in spring 1993. But it also brought me, 23 years later, to Melbourne, Australia, to deliver a paper based on the research for Tableau to the “Conference on Art, Objects and Emotions, 1400-1800” of the Australian Research Council Centre of Excellence for the History of Emotions. When I found out about the existence of the Centre of Excellence I realized, as did many other participants in the inspiring project, that much of my earlier work had been about emotion in art, without having thought about it in those terms. The Australian initiative was a catalyst for what is hopefully called the emotional turn.

Why I put it that way to Annelette I don’t know, but I do know why the interchange came back to me today. It’s that business of having six months to live. Forgive my morbidness, but it’s in the air. We used to expect death to come announced, in predictable stages that started with mild complaints or a routine checkup. Now as an 80-year-old you live with the threat of hearing about your impending death not from an empathetic doctor who has been treating you, but from a triage team in an emergency ward, asking you whether you really want to go into coma in an intensive care unit, a treatment that would wreck you even if you survive it, while there is a queue of younger patients behind you that stand more to benefit from that bed. At that point, your prospect is not for six months of life, but six days. My intent not to think about this is not always successful.

There is a more personal question that I ask myself. Why is it that I have not been lending priority to the things I care about most, the principle that led me to Mount Stuart? I’m afraid it’s because I care about too many things, rather indiscriminately. I enjoy research and even work so much that I am easily fulfilled by what I can accomplish in a good day’s efforts. Letting myself be guided more by outward circumstances than by inner need suits me fine. Having said that, however, I realize that I do have another existential ambition. There should be, in Florence, an album of Mughal portraits, or at least a record of one, that would solve one of the big mysteries in Rembrandt research. After kicking it around for nearly two years since I found out about it, I did block a week on my calendar for an intensive campaign in the libraries, archives and print rooms of Florence. It was the third week of March, when the Italian lockdown mercifully kept me from putting my life on the line in fulfilment of a research dream.

Gary Schwartz (Brooklyn, New York, 1940) studied art history at New York University and Johns Hopkins University before moving to the Netherlands in 1965, where he has been active as a translator, editor and publisher; scholar, teacher, lecturer and writer; and as the founder of CODART, an international network organization for curators of Dutch and Flemish art. Among his publications are standard works on the immortal Rembrandt, the connoisseur’s favorite Pieter Saenredam, the forgotten Gerard Pietersz van Zijl and the even more obscure J. van Beecq. He has been writing a blog, now called the Schwartzlist, since 1995 (online at garyschwartzarthistorian.nl).