Painters at the Pictures: the Cinema and Artistic Biography
David Ekserdjian

Having just read Gary Schwartz’s eloquent and moving contribution to Food for Thought, I am overwhelmingly aware that I could never hope to begin to match his intensely personal tone. In theory, this might be because I am an emotionally sub-zero Brit, but I hope not. The joy of sharing a few simple pleasures should be ample justification for writing this piece, and although – most implausibly – I can claim to have shared a sofa in Annabel’s nightclub with Jodie Foster (born 1962) in 1986, and to have chatted up Luise Rainer (1910-2014) – who won the Best Actress Oscar in 1936 for The Great Ziegfeld and then again in 1937 for The Good Earth - at a party in London in 2006, my role here is above all that of the anonymous nobody in the darkness of the cinema we all long to be allowed to visit again one fine day.

Fictional film biography may only represent a minute corner of the vast domain of biographical films – or biopics, as they are commonly called – more generally. Nevertheless, there can be no doubt that the creators of moving pictures have enjoyed a long love affair with the lives of their cousins the painters – and indeed sculptors. In the latter category, there are two films about Camille Claudel, played in 1988 by Isabelle Adjani opposite Gérard Dépardieu as Rodin, and in 2013 by Juliettte Binoche, not forgetting Ken Russell’s Savage Messiah of 1972 about Henri Gaudier-Brzeska, with a screenplay by a dear friend, the late Christopher Logue.

What makes this specific group of films so intriguing is both the extraordinary diversity of artists who have been accorded what is after all a very particular form of star billing and the head-spinning range of approaches adopted. My choices are inevitably the merest tip of the iceberg, but have been selected on merit, although it is no bad thing that almost all of them should prove relatively easy to track down on DVD or Blu-Ray. 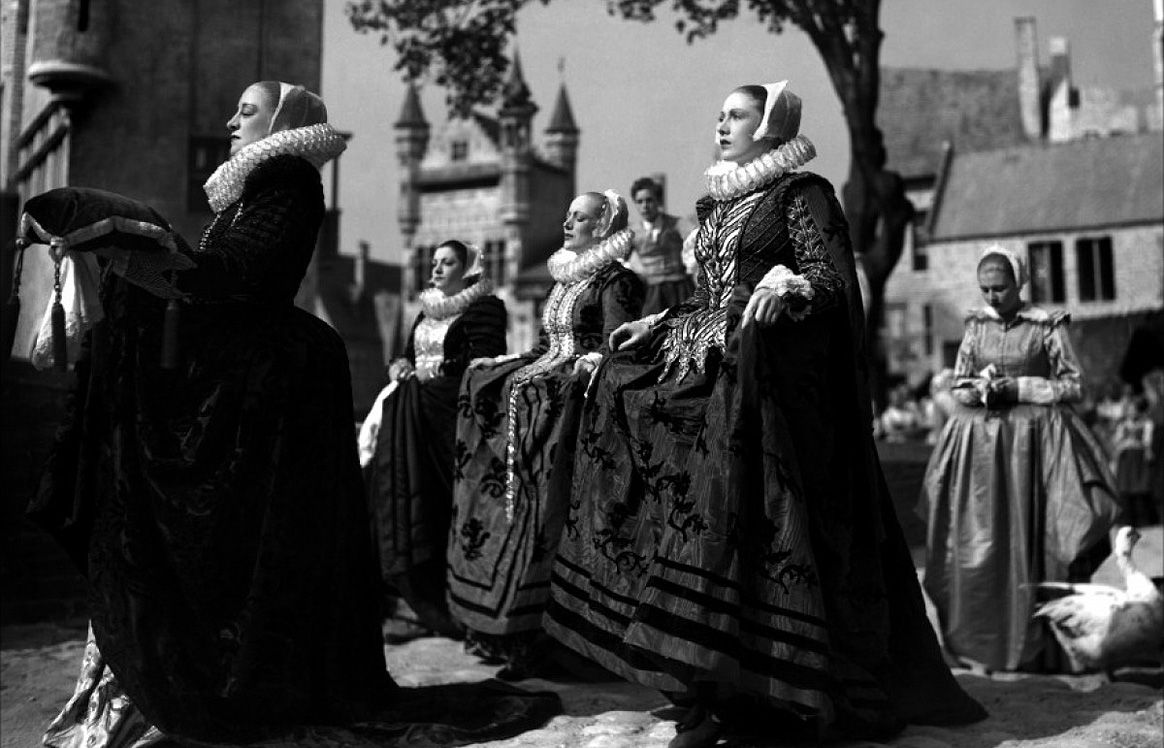 On the face of it, it might seem only reasonable to assume that films about artists would invariably tend to head in the direction of the art film, but nothing could be further from the truth. In 1934, Hollywood came out with a hilarious if less than entirely masterly film called The Affairs of Cellini, based on a popular stage play, but ultimately of course on Benvenuto Cellini’s rip-roaring Autobiography. Directed by Gregory La Cava, it starred the ever-reliable Frederic March as the swashbuckling sculptor, but also featured Fay Wray – best known for having inflamed King Kong with passion – as Cellini’s model, and Frank Morgan – best known for having played the Wizard of Oz - as a distinctly smitten Duke Cosimo de’ Medici. Elsewhere, in one of the greatest of all French comedies of the 1930s, Jacques Feyder’s sparkling La Kermesse Heroïque (1935), the painter Jean – as he is called - Breughel (Bernard Lancret) has a walk-on part as the ultimately successful young lover of the pompous mayor’s daughter, but the film has next to nothing to say about his art beyond showing him having painted an entirely characteristic group portrait rather in the manner of Frans Hals. 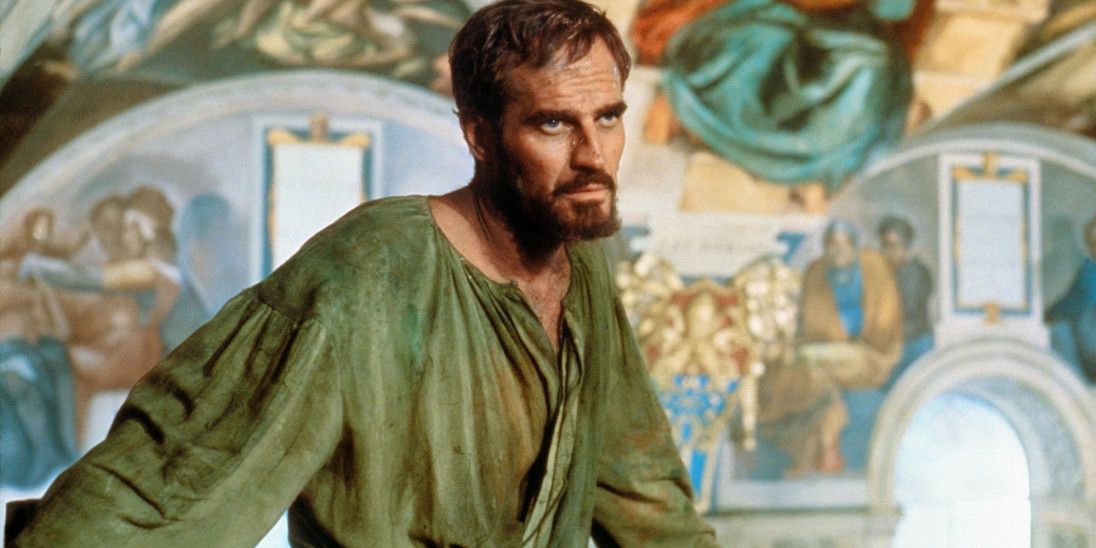 Charlton Heston as Michelangelo, The Agony and the Ecstasy, 1965

By the 1950s and 1960s, the Hollywood approach was altogether more opulent and thrilled to make the most of glorious Technicolor. Its two high points were Lust for Life (1956) and The Agony and the Ecstasy (1965). The former was directed by Vincente Minelli, and starring Kirk Douglas as Van Gogh and Anthony Quinn – who won a Best Supporting Actor Oscar for the role – as Gauguin, and involved a genuine attempt to capture both the demented passion of the artist and not least his incandescent response to the intense light and saturated colours of the warm South. Arguably more of a victim of the passing years, Carol Reed’s presentation of Michelangelo in The Agony and the Ecstasy is simultaneously preposterous and oddly irresistible. The principal focus of the drama is the confrontation between Michelangelo (Charlton Heston) and Pope Julius II (Rex Harrison) in connection with the Sistine Chapel ceiling, but it was also felt necessary to introduce an unimpeachably heterosexual love interest in the form of the smouldering Diane Cilento. 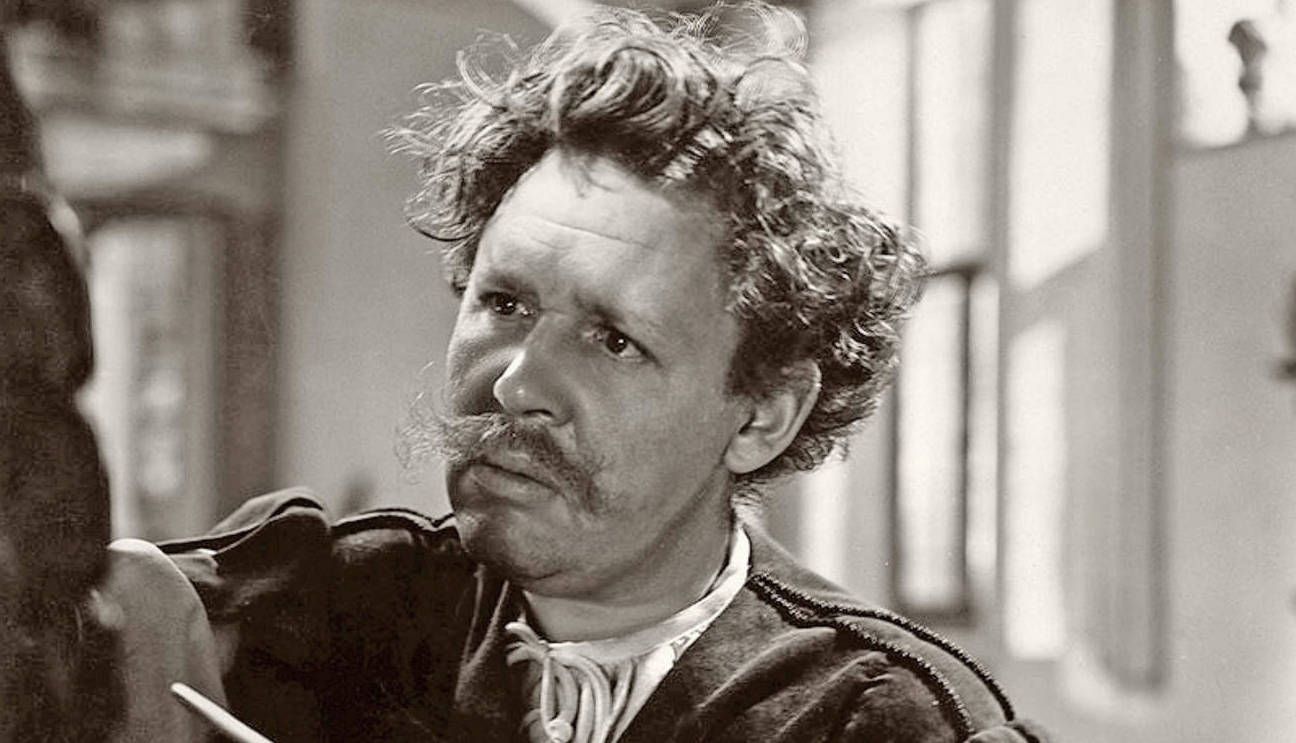 On the other hand, it would be misleading to imagine that halfway serious films about artists were only a later phenomenon. On the contrary, Alexander Korda’s Rembrandt (1936), with a script by the distinguished German playwright Carl Zuckmayer and two others, is an intensely touching evocation of arguably the most painfully human of all artists. It has to be admitted, however, that what makes it so remarkable is the performance of Charles Laughton in the title role: not only do his blobby features perfectly suit the Rembrandt we know from the self-portraits of his maturity, but he also happens to possess the speaking voice of an angel. 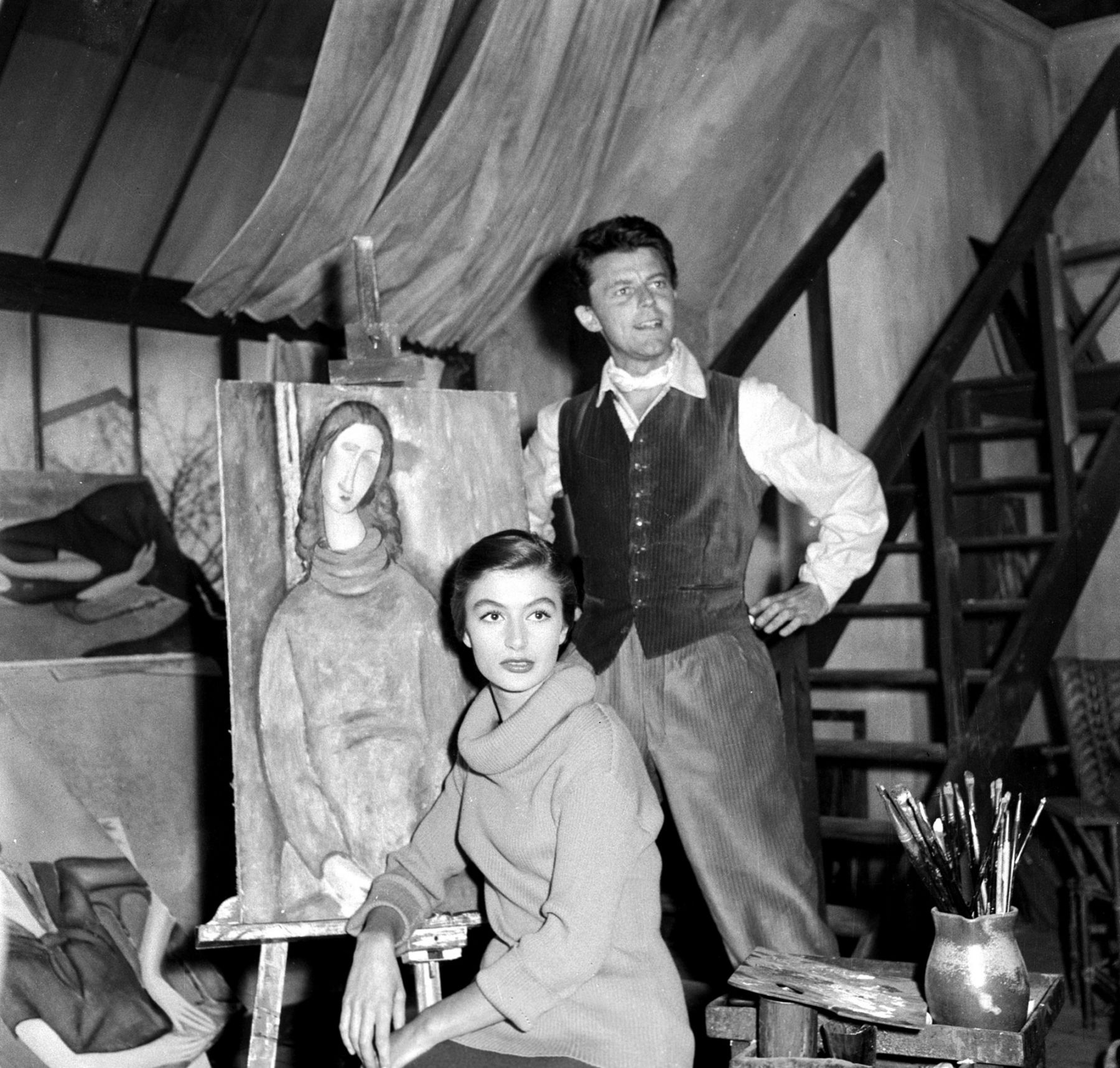 Two other biopics of artists, respectively dating from the 1940s and 1950s, are both at least equally ambitious in their approach. In the case of the second, which it makes sense to consider first, Les Amants de Montparnasse (1958), the results are impressive in spite of the fact that the production was doubly overshadowed by tragedy. The film was begun by Max Ophuls, the most visually perfect director of them all, and then completed after his death by Jacques Becker. It stars the ultimate French heartthrob Gérard Philipe as Modigliani, ably abetted by Lili Palmer and Anouk Aimée as his two muses, Beatrice Hastings and Jeanne Hébertune, but by the time it was released Philipe too was dead of cancer at the age of only thirty-six. 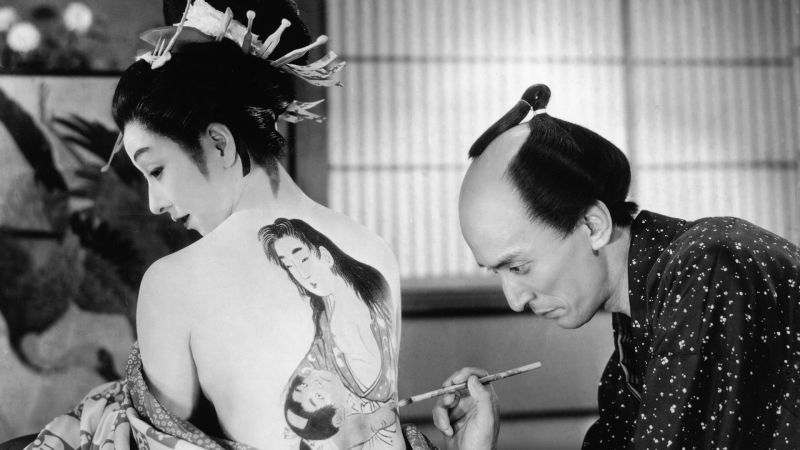 The earlier of the two takes us outside the European tradition both artistically and cinematically. Utamaro and his Five Women (1946), was directed by Kenji Mizoguchi, without question one of the greatest of all Japanese film-makers, and is about an equally illustrious eighteenth-century artist, celebrated above all as a print-maker. Its hero becomes a species of alter ego for the director confronting the dilemmas and compromises of his professional existence in post-war Japan under American occupation. 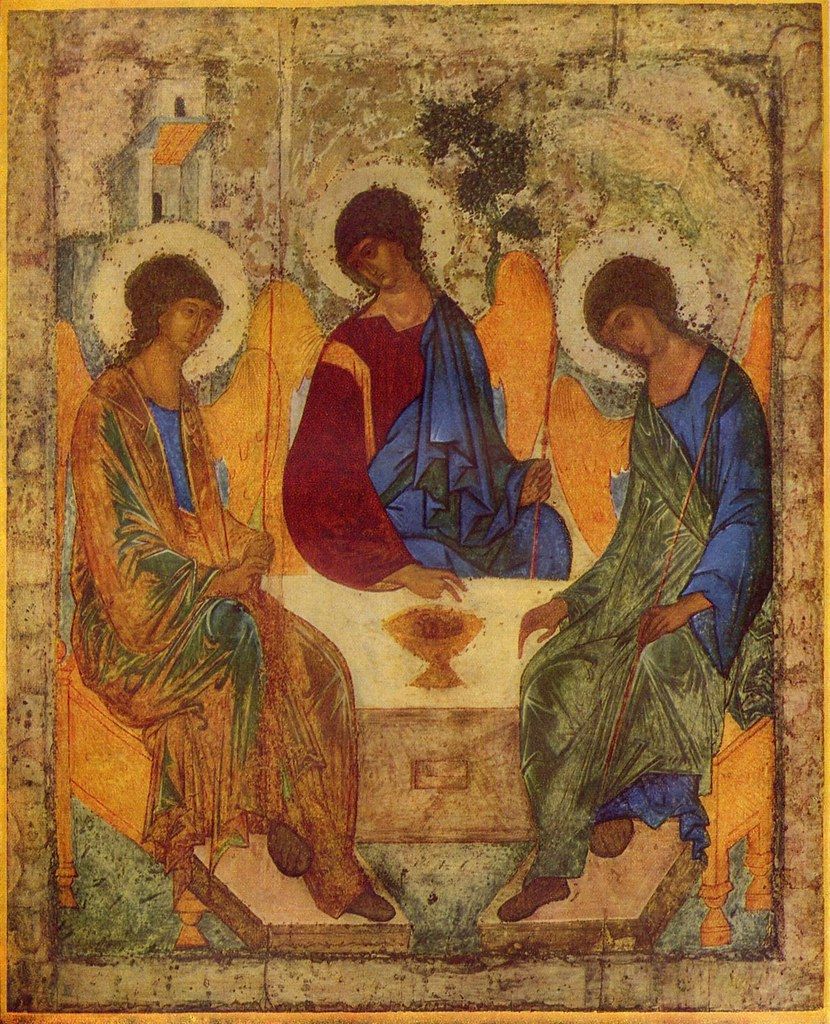 In 1966, Andrei Tarkovsky made Andrei Rublev, which has a good claim to be regarded as quite simply one of the best films ever made. As its title indicates, its central focus is on the great fifteenth-century icon painter, but at the same time it is a true epic (it runs for just over three hours), and by no means narrowly fixed upon either him or his art. Yet its black and white universe concludes by bursting into colour in contemplation of his supreme masterpiece, the Trinity in the Tretyakov Gallery in Moscow. 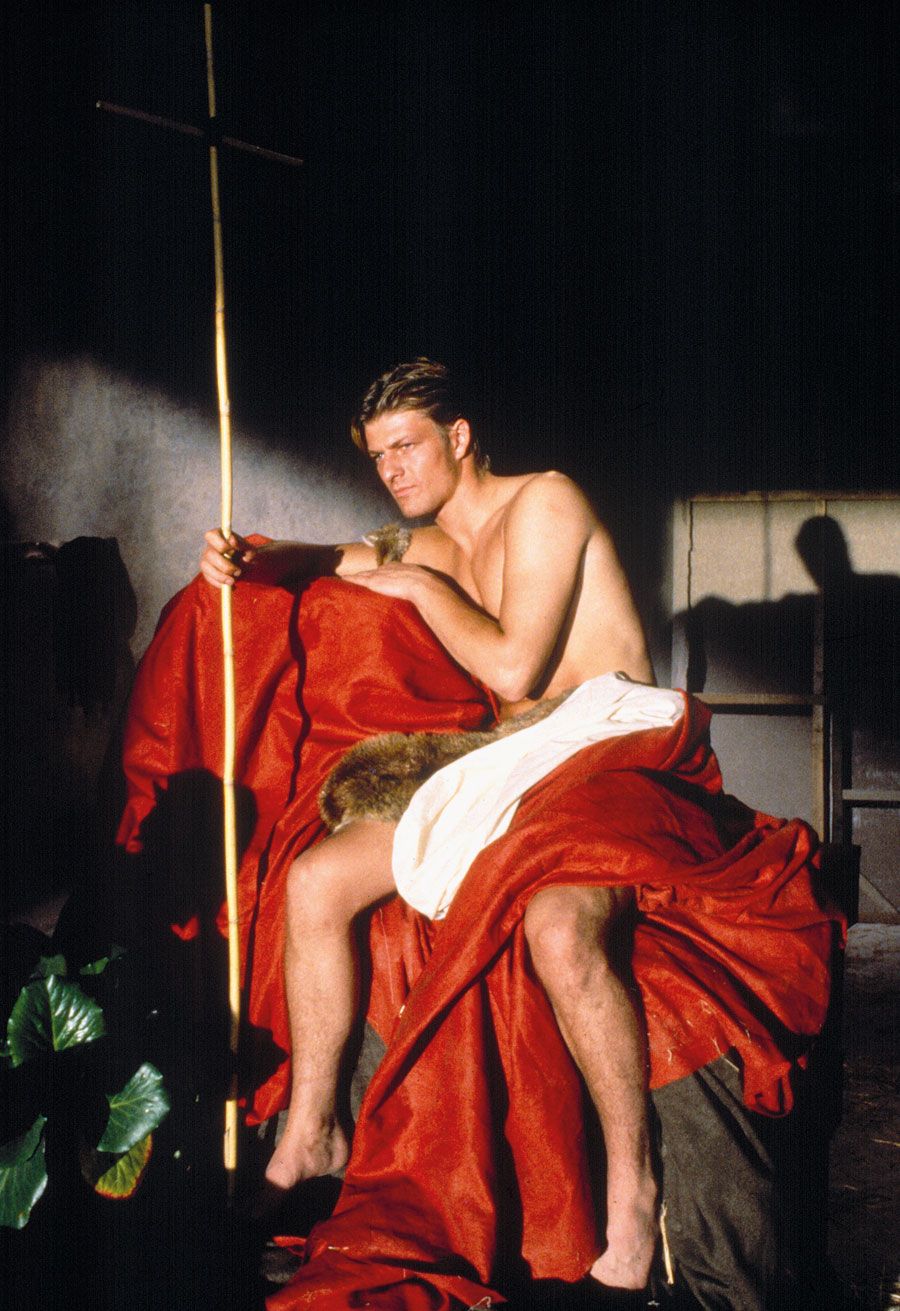 Many – but not all – more recent biopics are about more recent artists. Derek Jarman’s lovingly observed Caravaggio (1986) – with a cameo appearance by Sir Norman Rosenthal, as he then was not yet - is one exception, while Mike Leigh’s 2014 monumental Mr. Turner, starring Timothy Spall, is another. Both films were true labours of love. Moreover, both artists, in their very different ways, might be described as rebels against their respective ages, and it is not hard to grasp the appeal for film-makers of misfits both ancient and modern. Ed Harris not only directed but also starred in Pollock (2000), which charts Jack the Dripper’s artistic triumphs and personal disasters unflinchingly. In Frida (2002), directed by Julie Taymor, Salma Hayek is Frida Kahlo, and Alfred Molina is her husband Diego Rivera, but their tempestuous relationship is naturally not the exclusive focus, with Trotsky and her entanglements with women also having their moments in the limelight. Finally, within this selection, comes Love is the Devil (2006), in which Derek Jacobi plays Francis Bacon and a most definitely pre-007 and frequently very nude Daniel Craig is his ex-burglar lover and muse, George Dyer.

Having attempted a whistlestop tour of over a dozen biopics of artists, it seems only right to conclude with two or three sideways glances at the subject. One concerns the problem of how either to represent actual works of art in such films, which is a bit of a nightmare, or to steer clear of doing so, and hope nobody notices. It is far easier when the artist is fictional: in The Horse’s Mouth (1958), Alec Guinness plays Joyce Cary’s Gulley Jimson, and his artworks are by John Bratby, which must have seemed an inspired choice at the time, but – like poor Bratby’s art – has not worn well. Another amusement is trying to identify the works in people’s houses in all sorts of movies, the classical example being the bad guy’s ownership of the Goya Portrait of the Duke of Wellington in Dr. No (1962), which had recently been stolen from the National Gallery and not yet recovered. Sean Connery’s James Bond raises a quizzical eyebrow, but not a word is said.

Last but not least comes Carl Theodor Dreyer’s Thorwaldsen – Denmark’s Great Sculptor of 1948. Documentaries are not the same thing as biopics, so do not really belong in this survey, but rules are there to be broken, and this 11-minute miniature is too good to be overlooked.

Since 2004, David Ekserdjian has been Professor of History of Art and Film at the University of Leicester. He studied History of Art at the Courtauld Institute of Art, University of London (MA 1979, PhD 1988). He was a Fellow of Balliol (1983-86) and Corpus Christi (1987-91) Colleges at Oxford. Before taking up his present position, he was Editor of Apollo magazine from 1997-2004. The author of numerous books, exhibition catalogues, and articles, he is currently a Trustee of the Soane Museum and Art UK, and has previously served as a Trustee of the National Gallery (2005-13) and of Tate (2008-13). He is an Honorary Citizen of the town of Correggio.