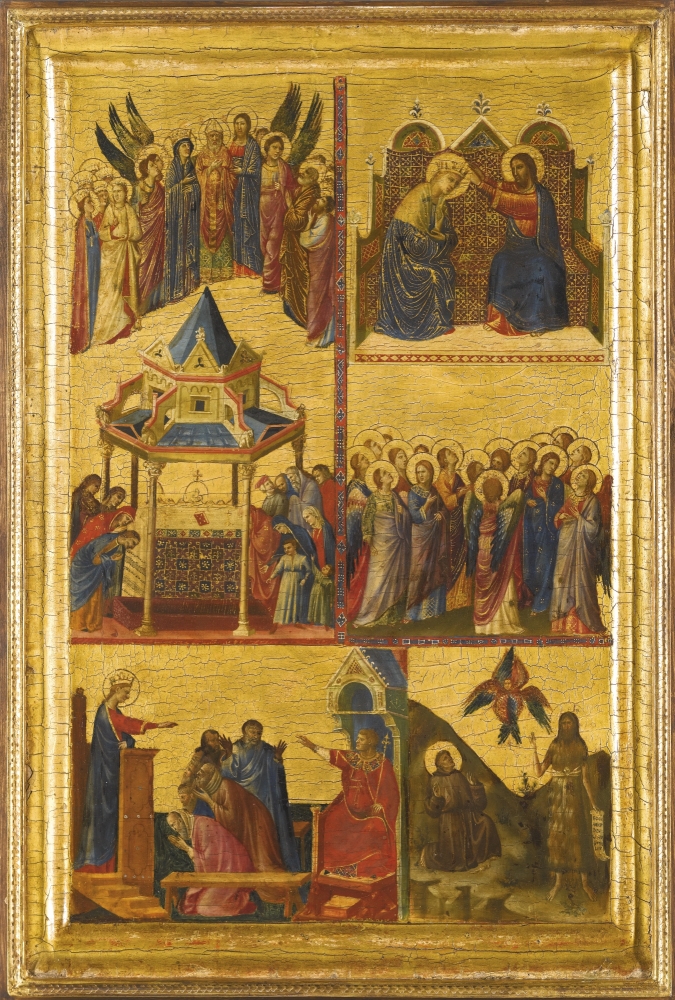 Rimini is today best known as a resort half-way up the somewhat tawdry Adriatic coast of Italy. Now people go there to frequent its techno nightclubs and I have friends who have honed their ping-pong skills playing on one of the many outdoor tables there. Germans, Russians, Dutch, English and even Italians battle for loungers laid out in endless rows on the miles of sandy beaches, conveniently situated next to a railway track which runs the length of the Adriatic. Italy’s greatest filmmaker, Federico Fellini was born in Rimini and much of this work recalls his childhood in Emilia Romagna. Before Fellini, Rimini’s most famous natives were probably the members of the Malatesta family, known like the Montefeltro as both fearsome condottiere and patrons of a highly civilized Renaissance court, of which Alberti’s Tempio Malatestiano is perhaps the best-known monument.

The Malatesta family first took power in Rimini at the end of the thirteenth century. And this is the period covered by a sensational focus exhibition at the National Gallery, London (Giovanni da Rimini Scenes from the Lives of the Virgin and other Saints. Continues through October 8) which recently drew my attention. Installed in Gallery 1, at the top of the stairs by the Trafalgar Square entrance, this small exhibition assembled by Anna Koopstra, celebrates the gift to England by the American businessman, collector and philanthropist, Ronald Lauder, of a magnificent panel he acquired at Sotheby’s in London two years ago. It was at that time offered for sale by the Duke of Northumberland. Under the terms of this arrangement (David Koch entered into a similar arrangement when he bought a major pair of Coastal Scenes from the Clive Collection by Claude-Joseph Vernet in 2003), Mr Lauder will be able to enjoy ownership of a splendid panel by Giovanni da Rimini during his lifetime, after which it will hang at the National Gallery, London. This is an exceptionally civilized way of allowing foreign-based collectors to acquire major works of art from British collections while securing them for the nation in the longer term.

Gabriele Finaldi, in his Director’s Preface to the exhibition catalogue, makes the point that this is probably the first and last time that the very small group of related small panels by Giovanni da Rimini (one of which is normally at the Galleria Nazionale d’Arte di Palazzo Barberini, Rome, the other in the Pinacoteca Communal, Faenza) will ever be seen in England. The centerpiece, the Scenes from the Lives of the Virgin and other Saints (fig. 1), was purchased from the Camuccini collection in Rome by Algernon Percy, 4th Duke of Northumberland, in 1853. The panel was painted in Rimini c. 1300-1305. There is good reason to believe that the Scenes from the Life of the Virgin was originally paired with the Scenes from the Life of Christ (fig. 2) (Palazzo Barberini, Rome). It has an almost identical engaged frame, is the same size and has virtually indistinguishable fictive borders dividing the scenes. 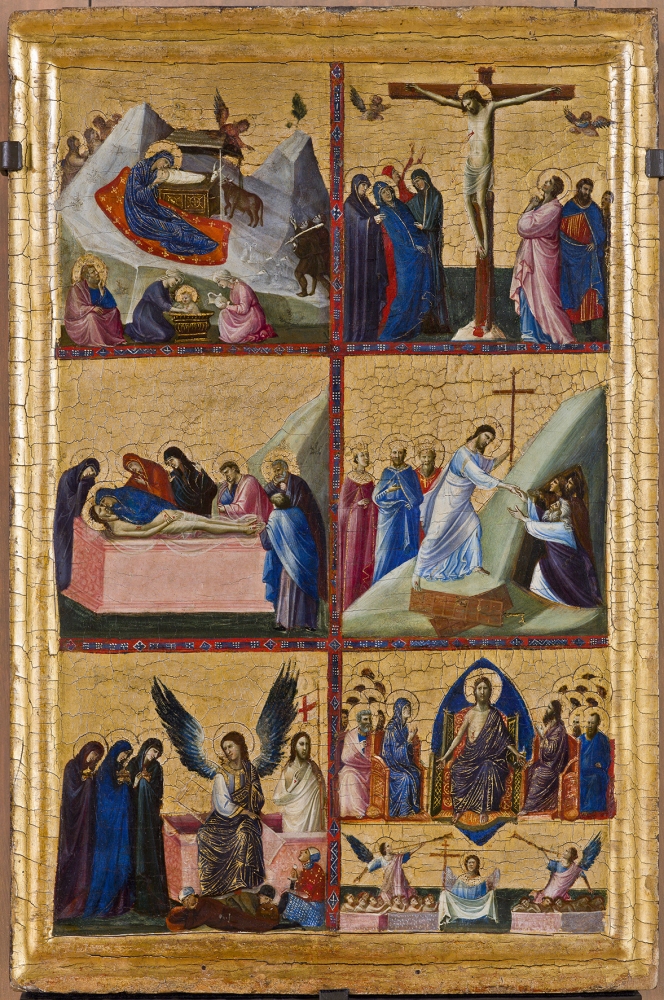 The flowering of the Rimini school in the first half of the fourteenth century was the result of a number of related events: the growth of Rimini as an economic force linking north Italy to the south and across the Adriatic, as a port in the network joining the Byzantine empire to Italy; the arrival in Rimini of increasingly well-funded mendicant orders most notably the Franciscans and the Augustinians; and the decisive visit in about 1300 of Giotto. There are no surviving documented works by Giotto in Rimini but a painted crucifix now attributed to the Florentine artist is in the Tempio Maletestiano, and one can assume that frescoes were painted by him for the now destroyed church of San Francesco. This exhibition touches on the two key cultural influences on the shadowy figure, Giovanni da Rimini, recorded in archives from 1292 to 1300 as Johannes or Zagnonus pictor, the impact of the innovation of Giotto and the persistence of the Byzantine tradition (Ravenna is only 40 miles north of Rimini).

The Giottesque connection to Giovanni’s art is represented here with the small Pentecost panel (fig. 3) from the National Gallery’s own collection, which they have identified as part of a horizontal altarpiece painted for a Riminese patron. However, the painterly facial types and carefully paced spacing of the assembled figures show a temperament rather different to that which produced the exquisite panels which are the centerpiece of this exhibition. The Painted Cross (San Francesco, Mercatello sul Metauro) and a few surviving frescoes (Sant’ Agostino, Rimini) are clearer examples of Giotto’s influence on Giovanni di Rimini.

The two small panels by Giovanni, also show a continued dependence upon a Byzantine aesthetic which, though not illustrated by any painted work in this exhibition, is alluded to by two exquisite ivories: one a tenth-century Nativity (British Museum, London), the other a twelfth-century Scenes from the Life of Christ (Victoria and Albert Museum, London). We see in both the Rome and the Lauder panels a miniaturist tendency, a love of narrative detail which is both individualised such as the Giottesque children tugging at the sleeve of the pious ladies at the lower right in the scene of the Apotheosis of Saint Augustine and hieratic such as in the exceptionally refined treatment of the assembled saints and angels gathered round as if in an apse at the upper register of the same scene. The brilliance of the palette in both panels and the delicacy of the shell-gold highlights to the draperies is truly breath-taking. Partly this is attributable to the quality of the painting itself but it is also its outstanding condition which makes it possible for us to appreciate an object, surely intended for private delectation, made over seven hundred years ago. The dominant Byzantine influence is also evident in the icon-like composition of the Virgin and Child (Pinacoteca Communal di Faenza) in the other panel by Giovanni da Rimini lent for this occasion. Though even here the artist has introduced naturalistic elements which are more modern. 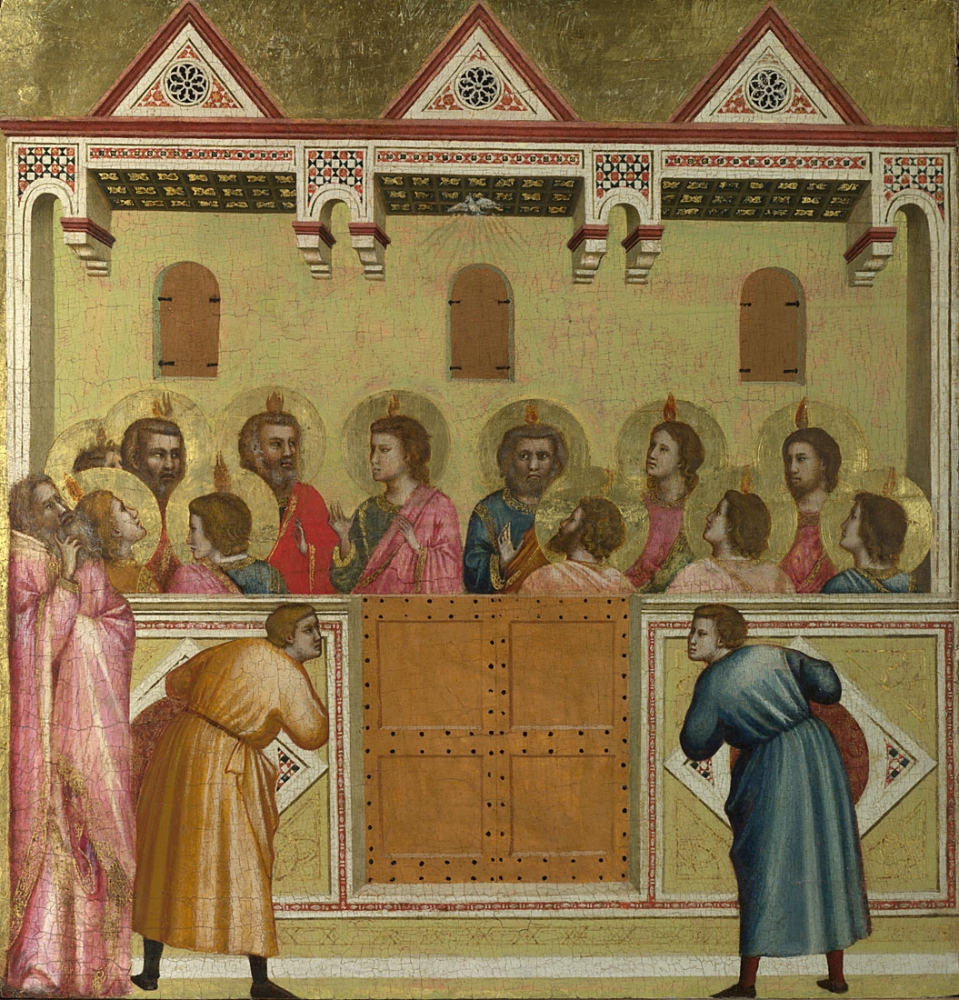 The generation after Giovanni, led by Pietro da Rimini would depart more emphatically from the Byzantine tradition and adapt to Giotto’s innovations more whole-heartedly. The best example of Pietro's work was, like some of Giovanni’s work, painted for Augustinian patrons, in this case the fresco cycle at the Capellone of San Nicola at Tolentino, now a short journey south and inland from Rimini. The chief difference is that Giovanni was an exact contemporary of Giotto, working in Rimini at the same moment, and so his capacity to absorb Giotto's example without the mediation of the entrenched Byzantine aesthetic would have been more limited than it would be for later artists.

While by no means a blockbuster, this is a dazzling little exhibition which does well to showcase a superb addition to the holdings of the National Gallery, London. The catalogue is also clearly written and beautifully produced.