Fig. 10: Three standing men, c. 1513–14
Red chalk over some blind stylus, and leadpoint for a separate sketch, the sheet cut at the right by an early collector, 40.3 x 28.1 cm.
Inscribed by Albrecht Dürer (1471–1528) in pen and ink: ‘1515 / Raphael of Urbino, who was so highly esteemed by the pope, made this nude image and sent it to Albrecht Dürer in Nuremberg to display his hand.’
© Albertina Museum, Vienna 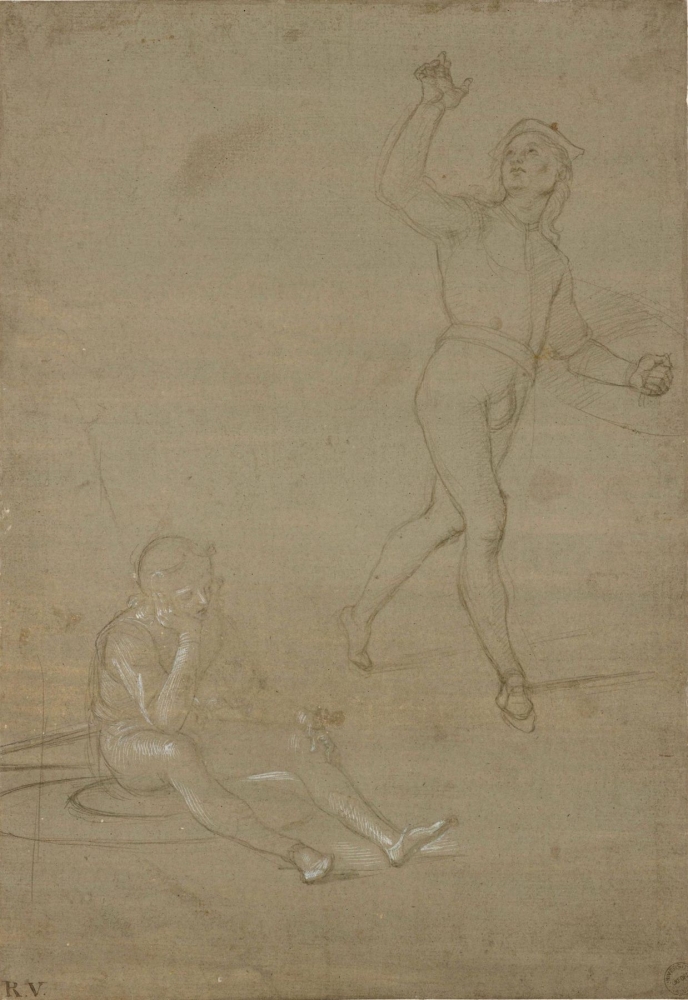 Raphael: The Drawings, on view at the Ashmolean Museum celebrates the fact that Oxford is the richest center for drawings by Raphael in the world. This is one of the most absorbing and beautiful exhibitions anywhere this year, and anyone who can should make the effort to go and see it.

Raphael was born in 1483 in Urbino, a central Italian city whose court attracted such talents as Piero della Francesca and Baldassare Castiglione. He later worked in Medicean Florence and Papal Rome. Raphael’s posthumous reputation is as one of the great triumvirate of Italian renaissance artists, alongside Leonardo and Michelangelo. He was the handsome, bright young thing: an artist who moved naturally with princes, popes, and bankers and whose social ease seemed to be reflected by his courtly artistic refinement. Raphael is revered as a purveyor of harmonious, serene Madonna’s and supremely elegant frescoes, such as The School of Athens. But this truly extraordinary exhibition of 120 drawings by Raphael at the Ashmolean Museum (which owns 50 of the exhibited sheets) shows us an unexpectedly vivid and varied artist: a prodigy of faultless technical ability and a draughtsman of vigor, passion, sensuality, and imagination. And by seeing successive phases in the development of his pictorial ideas we feel we are standing right at his shoulder at the moment of their creation.

The exhibition highlights Raphael’s remarkable versatility in every medium. Early in his career he perfected the precise technique of drawing in metalpoint -- the use of a stylus made of a metal such as lead or silver drawn over a prepared colored sheet -- but he used the more spontaneous medium of pen and ink with equal mastery as well as chalk, both red and black, the latter becoming a more important feature of his draughtsmanship as he matured. 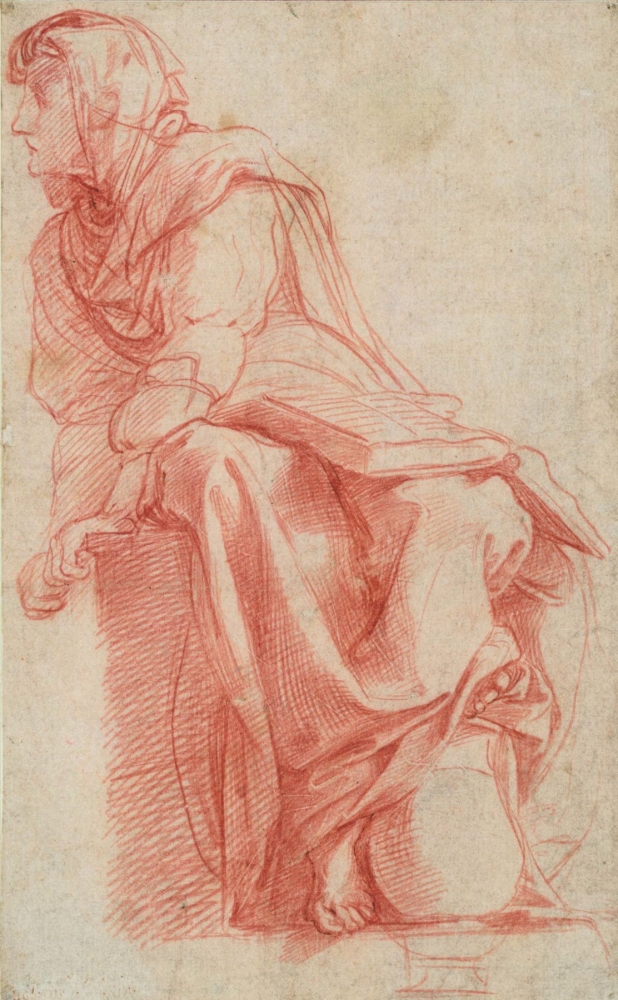 The early drawings show Raphael’s origins as a pupil of Perugino and contemporary of the older Pintoricchio (for whom he made drawings for the Piccolomini Library in Siena). The balletic grace of his elegant figures, be they disciples clad in doublet and hose in a preparatory drawing for a Last Supper or sleeping soldiers in hose and codpiece all in metalpoint on colored paper with delicate, brushed-in white highlights (fig. 1), shows Raphael as a product of the courtly city-state culture of the late quattrocento. But even in these youthful drawings one sees the chasm between Raphael's vision and economy and the more static, pedantic vocabulary of his teacher.

By 1504, following his move to Florence, Raphael is at the same time finding his own voice and absorbing the lessons of Leonardo and Michelangelo. This magpie tendency persisted throughout Raphael’s career and was noted by his contemporaries most famously Michelangelo who fumed “all that he has he took from me.” And one can sympathise with the grumpy, older artist. Raphael’s sibyls (fig. 2), designed for Agostino Chigi’s chapel, are clearly indebted to Michelangelo’s sibyls in the Sistine chapel. In some cases, Raphael's homage is more direct, as in a pen and ink male nude inspired by Michelangelo’s David or the pen and ink drawing after Leonardo’s Leda and the Swan. In other cases, such as a double-sided sheet (Vienna, Albertina) showing developing ideas for a Madonna and Child (fig. 3), one is merely reminded of the lively naturalism of Leonardo’s studies of the same subject. Beginning with a group of red chalk studies, rendered in manic, swirling strokes, a sequence of pen and ink ideas traces Raphael’s exploration of the relationship of mother and child. Looking at this sheet which is clearly drawn from the imagination, we feel that we are getting to the heart of the artist’s initial creative process, a ‘process of research and realisation’ in Whistler’s words. That Raphael lost his own mother when he was eight may have added a personal significance to this recurring theme.

Picasso declared himself an ardent admirer of Raphael and it is easy to imagine that, when envisioning Guernica, the Spanish artist had Raimondi’s print after Raphael of the Massacre of the Innocents at the back of his mind. This exhibition includes no fewer than four studies for the print (how often has artist expended so much energy designing a print?) and disabuses one immediately of the idea of Raphael as a painter of sweet Madonna’s. The drawings vibrate with violence, energy, and dramatic intensity, especially the two red chalk studies where the pressure of the artist’s hand on the sheet is palpable in the depth of color. The haunting figure of the hollow-eyed mother, clutching her baby, running directly at the viewer (fig. 4) has a profound pathos which anticipates baroque artists such as Caravaggio, Reni, and Rubens. 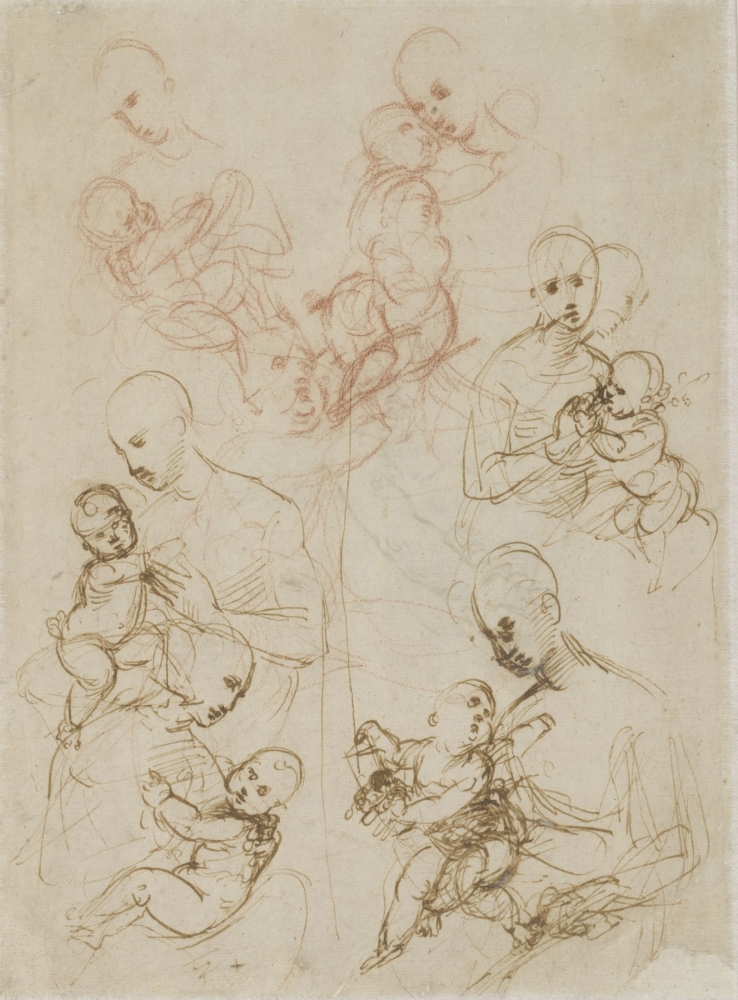 Raphael was well-known in his own day for his good looks and his passionate private life, to which some attributed his premature death. Two sheets in this exhibition include lines from Petrarchian sonnets Raphael himself had penned, one of which reads, ‘Now I proclaim and openly admit that you (love) are my master in all…and that no defence, in thought or deed, is strong enough to escape your fury and your passion’. The drawing on this page shows a standing man in black chalk, ostensibly a drapery study, and next to him a suppliant naked woman in pen and ink (fig. 5). More explicitly erotic are the red chalk drawings relating to Raphael’s frescoes for Agostino Chigi at the Farnesina villa in Rome. In one, we see Venus who jerks back backwards in surprise to accept from Psyche the vase of Proserpine (fig. 6). But, despite the drama, the drawing is as much about Raphael’s fascination with the way strokes of red chalk can evoke the softness and beauty of female flesh. The supple limbs of the Goddess of Love are modelled in dappled contours with silky hatching; some pubic hair seems to peek beyond the folds of her skimpy drapery. This sheet exemplifies the eroticism of which Raphael was capable. It was said that Chigi had to install Raphael’s mistress in the villa to ensure the artist’s continued application to the work in hand.

A question about drawings in general, but those by Raphael in particular, is what was their actual function? They can be rapid observations from nature, intended as a sort of record, a notebook. They can be explorations or improvisations on a theme as the artist worked on compositional solutions. They can be detailed analyses of a particular element ultimately to be rendered in paint, be it a drapery study or the character study of a head. Raphael’s drawings of all levels of finish, in all the various mediums, hover between preparatory efforts and finished works of art in their own right. Even the mis en page of several ideas on the same sheet, a concept later developed in the head-studies of Rubens and the chalk drawings of Watteau, seems to be an intentional effect (fig. 7). 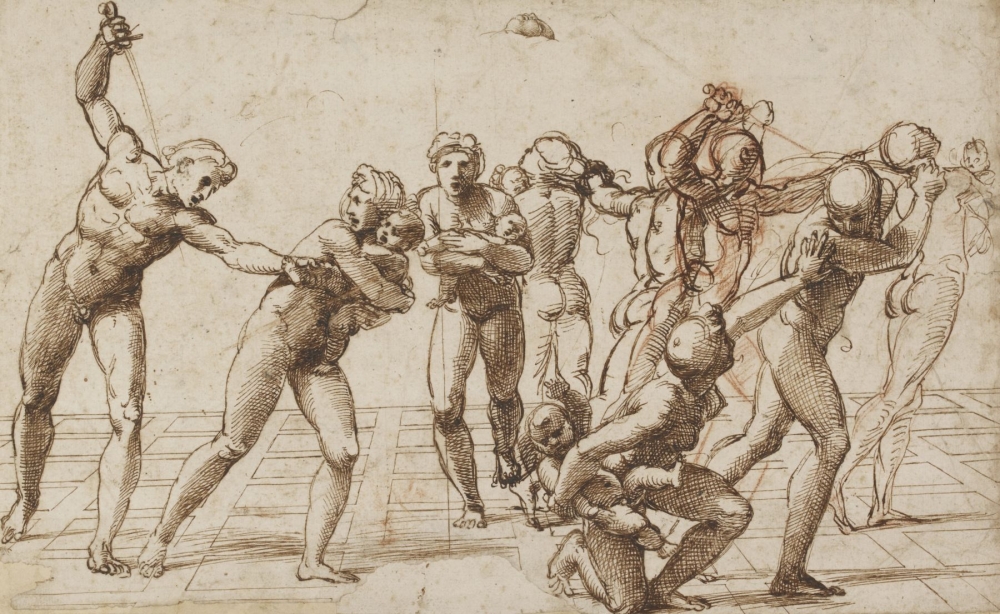 Fig. 4: Study for the Massacre of the Innocents, c. 1509–10
Pen and brown ink over red chalk and geometrical indications in stylus, selectively pricked for transfer, 23.2 x 37.7 cm.
© Trustees of the British Museum

What Catherine Whistler in her eloquent catalogue describes as ‘arguably the most impressive of all Raphael’s drawings’ (fig. 8) is an outstanding example of Raphael’s use of the art of drawing to develop an idea (in this case two figures for his great late Transfiguration), while at the same time to produce an independent work of art which shows off the artist’s virtuosity. It was surely intended to impress pupils and patrons alike. The Ashmolean Head and Hands of Two Apostles is regarded by some as the greatest drawing ever made.

The Ashmolean sheet is one of a number of auxiliary cartoons included in this exhibition. The term describes a process by which Raphael pricked holes (pouncing) in part of a large preparatory drawing or cartoon in which the composition for a painting had been worked out and then rubbing chalk through the holes produced the outline of a head or hand which would then be developed on a separate sheet. That drawing would become a reference point for the finished painting. The example in this exhibition which shows the process most clearly is the Head of a Muse (fig. 9), an auxiliary cartoon linked to the Parnassus fresco in the Vatican painted for Pope Julius II in 1510-11. In this drawing, the dots from the pouncing are clearly visible. But Raphael quickly moves beyond the mechanical process to produce a work of art of consummate delicacy. The artist used the chalk sometimes with cursory strokes to describe movement, sometimes with hatching to suggest volume, play of light, and the contour of the head dramatically delineated with the firmest line. 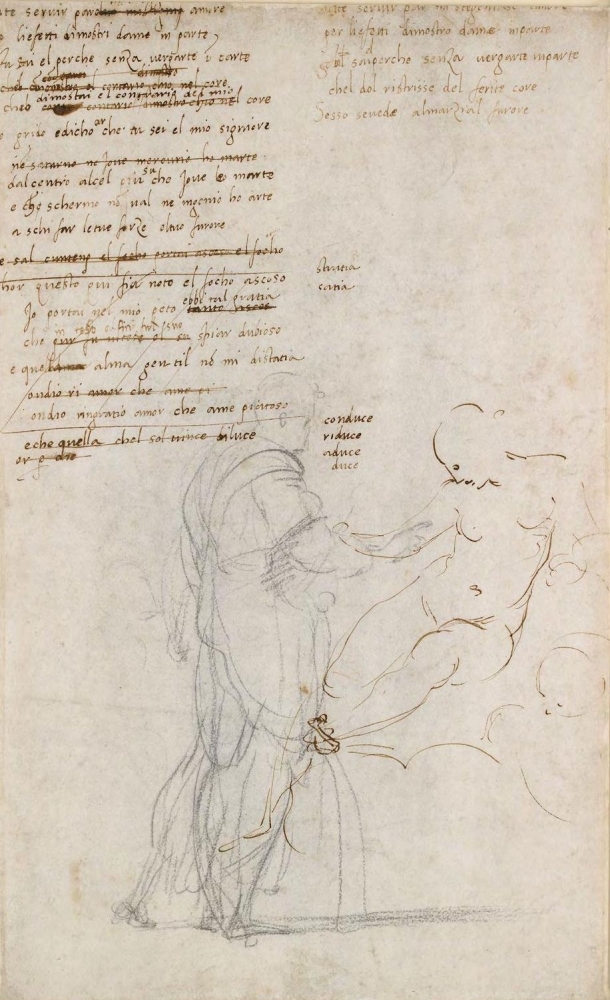 Fig. 5: Sheet of studies with a drapery study for the Disputa, and figure studies with drafts of a sonnet, c. 1508-10
Black chalk and/or charcoal with some white heightening (possible white chalk), 38.8 x 23.6 cm.
© Ashmolean Museum, University of Oxford

It is no accident that two of the most expensive drawings ever sold at auction are auxiliary cartoons by Raphael. One of them is the Head of a Muse, which sold for $48,009,960 in 2009. It was, at the time, the highest price ever paid for a work on paper. A Head of a Young Apostle, preparatory for The Transfiguration (not included in the exhibition) sold three years later for $47,852,960.

Compelling evidence that Raphael also valued his own drawings highly is the presence here of a remarkable red chalk Study of Three Standing Men (fig. 10). Executed in 1514-15, as a preparatory study for The Battle of Ostia fresco in the Vatican, Raphael sent it to his great German contemporary, Albrecht Durer. There is a moving inscription on it in Durer’s hand, ‘1515/Raphael of Urbino who was so esteemed by the pope, made this nude image and sent it to Albrecht Durer in Nuremberg to display his hand’. How appropriate, then, that the exhibition partner to the Ashmolean Museum, and the next venue, should be the Albertina in Vienna, not only the home of many great works by Raphael but also the repository of Durer’s most famous drawings.