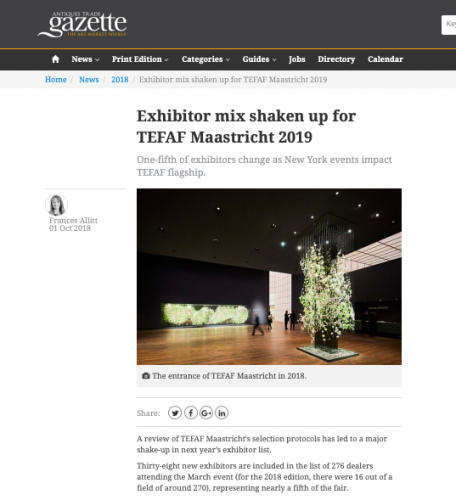 A review of TEFAF Maastricht’s selection protocols has led to a major shake-up in next year’s exhibitor list.

Thirty-eight new exhibitors are included in the list of 276 dealers attending the March event (for the 2018 edition, there were 16 out of a field of around 270), representing nearly a fifth of the fair.

“As part of the continued drive by the organisation as a whole towards modernisation and change, this year TEFAF introduced a new selection protocol for TEFAF Maastricht, which has led to a number of new dealers being invited to join the fair,” said TEFAF chairman Nanne Dekking.

Other arrivals are spread across the other sections including seven in Antiques, six in Paintings (including Nicholas Hall) and three in Ancient Art.