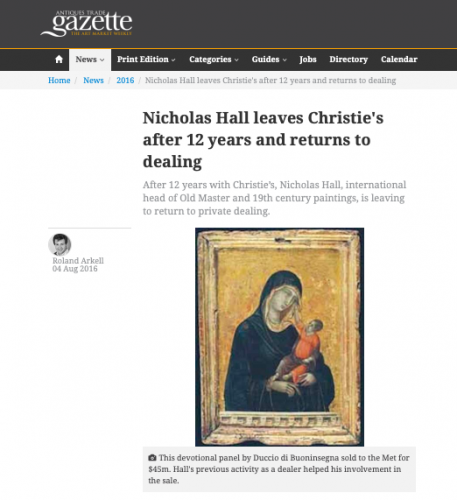 After 12 years with Christie’s, Nicholas Hall, international head of Old Master and 19th century paintings, is leaving to return to private dealing.

Hall joined Christie’s New York in May 2004 following the auctioneer’s acquisition of Hall & Knight, the gallery he opened in 1996 with former Colnaghi colleague Richard Knight.

Knight left Christie’s in 2015 to form a new partnership with Fabrizio Moretti under the banner of Knight Moretti based on Ryder Street in St. James’s.

During his time at Christie’s, he was involved with the move of the New York Old Masters sale from January to April and the development of cross category theme sales.

Hall's previous activity as a dealer helped his involvement in the $45m sale of the Duccio Madonna to the Metropolitan Museum in 2004, among a number of high level private sales.