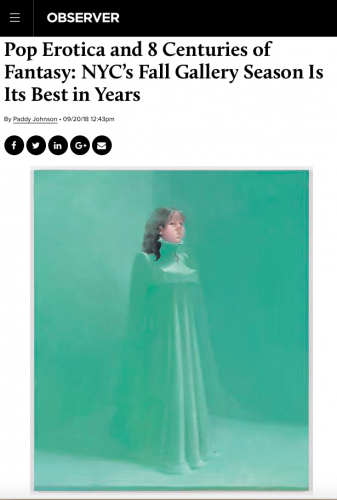 Let’s start with the one show you absolutely shouldn’t miss. Art just doesn’t get any better than what’s on view in Chelsea at David Zwirner’s “Endless Enigma: Eight Centuries of Fantastic Art” (through Oct 27), an exhibition that brings together three floors of psychologically charged artwork from historical giants such as Titian, Hieronymous Bosch and Francisco de Goya to contemporary masters like Louise Bourgeois and Sherrie Levine. It’s hard to overstate the sheer ambition and impressiveness of the 800 years’ worth of work curator Nicholas Hall brought together—much of which has been borrowed from museums and private collections. (In fact, it’s so impressive, I overheard a collector in Chelsea gossiping that the gallery had borrowed works from the Louvre—a rumor dismissed as untrue by a press representative from Zwirner.)

Of the more than 60 works on display, most are vaguely unsettling. Near the entrance of the show, crowds swarmed around the famed 16th century painting, The Garden of Earthly Delights, by a contemporary follower of Hieronymus Bosch. It pictures dozens of naked figures generally having a good time with strange beasts and flora. On a neighboring wall, two Lisa Yuskavage paintings turn heads. In one, a queen-like figure with cereal box–shaped breasts stares stoically into the void. In another, a crouching naked woman with a dog nose fully exposes her crotch. It’s classic Yuskavage, seductively painted and simultaneously creepy.

That creep is everywhere in the exhibition. There’s a 16th century gilded bronze clock-cum-chariot driven by a charioteer who looks like a clown, a Robert Gober flesh blob filling a laundry basket and a Francis Alÿs painting of a skeleton running away with his own detached forearm. Everything in this show is weird.