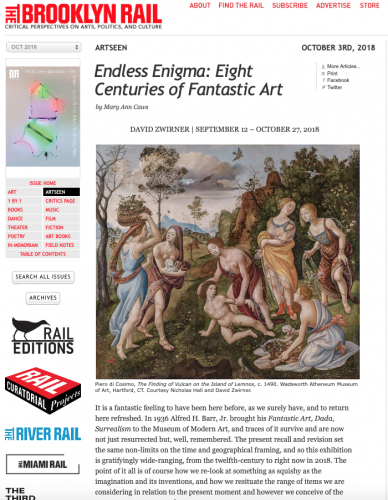 It is a fantastic feeling to have been here before, as we surely have, and to return here refreshed. In 1936 Alfred H. Barr, Jr. brought his Fantastic Art, Dada, Surrealism to the Museum of Modern Art, and traces of it survive and are now not just resurrected but, well, remembered. The present recall and revision set the same non-limits on the time and geographical framing, and so this exhibition is gratifyingly wide-ranging, from the twelfth-century to right now in 2018. The point of it all is of course how we re-look at something as squishy as the imagination and its inventions, and how we resituate the range of items we are considering in relation to the present moment and however we conceive of the contemporary avant-garde.

Here are some parts that riveted my walking about. First, the left eye of Gustave Moreau’s The Poet and the Siren of 1893. That unblinking and totally domineering glance would transfix anyone, let alone a bedraggled exhausted poet so small by the gorgeous vine-wrapped right thigh of the siren, whose corresponding hand dangles over the poor poet’s forehead, as that poetic finger immerses itself in the water, languid between the corals so vividly red on the left and right and all about the water. Beyond this, opens a bright lavender and blue play of waterfall, rocks, and river.

Extricating myself from the fronds, I felt towered over by Leonor Fini’s two-part panel of Painting and Architecture of 1938–9. If the little palette on one figure’s finger bespeaks the art part, the crisp angles of the five triangular forms on the other do the architectural measurement proud. Now her architectural title sends me off to de Chirico’s 1927 The Archaeologists with the mannequin figure slumped over with columns and ruins all bedangling, the columns matching exactly the angle of the mannequin’s fingers, a peculiar echo.

Among the more recent works, let me single out Sigmar Polke’s play on the great Renaissance painter Giuseppe Arcimboldo, here signaled as Arcimi Boldi (1984). What a complicated tribute in its colors: red, green, black, purple, etc, as in its wealth of materials, “acrylic, artificial resin, lacquer, and dispersion,” the latter as in that great dark blob whose claws reach out wildly down and around.

Surrealism loves contrasts: take Piero di Cosimo’s joyful, peaceful, flowery, leafy and fruity Finding of Vulcan on the Island of Lemnos of 1490 and from twenty-five years later, a follower of Hieronymus Bosch, The Garden of Earthly Delights, with its upside-down figures, extruding themselves from various vegetables, intermingling with the birds and large and small fish, some in improbable dwellings, and no one is in repose. Hands and feet and naked bodies and animals are crossed and writhing.  Hundreds of tiny figures astride horses, pigs, donkeys, ostriches, camels, and goats form a procession around a central pond, where more assorted bodies are trapped.

We could dwell in the wet of some of these as in Roberto Matta’s In the Center of the Water (1941), where the focus seems to come to rest on a bed-type shape so that the surrounding forms might well be part of dream, as in the celebrated surrealist position between night and day, sleep and waking.

Strangely calm is William Blake’s The Grave Personified of 1805, both in the face and the feet of the angel, and also in the lovely wings spread out. ‘Tis a truly sweet grave.

Salvador Dali’s preparatory drawing, Vulcain et Vénus of 1941, with multiple indications about the costumes and how the black is intertwined with the ivy on the legs, and its loud refusal of reproduction, is indicative of the care he took with detail, precisely a care we might miss in his extravaganzas.

Among my favorites was James Ensor’s 1889 Skeletons Warming Themselves. Two standing figures, dressed in the elaborate theatrical costumes treasured by his family upstairs from his Ostend studio while skulls lie to the side, and one pokes engagingly out from the doorframe. Some skeletons too. The trappings of culture are not forgotten, as a violin and a palette lean against a stove as if to give the only heat possible.

My other favorite is Kay Sage’s gorgeous and yet spare 1940 I Walk Without Echowhere a bright road leads up between two dark hillsides to a cliff while a shadow slices into the brightness, quite like the melancholy that slices into Sage’s writing and being, that sense of doom from even before she lost her beloved painter husband, Yves Tanguy, and her subsequent suicide.

How strangely and wonderfully does this eight-century experience end, with Francis Alÿs’s skeleton quietly tiptoeing  off sight and untitled, in a 2005 oil on canvas on panel, comparable to Michaël Borremans’ Fire from the Sun (2017) with its tiny naked figures scurrying about on an immense stage-like scene, on oil on canvas and on cardboard, as if the material were, in both cases, to compensate for the quiet unliveness and the small size of the unadorned actors. The avant-garde here carries its own weight on tiptoe, continuing the enigma.