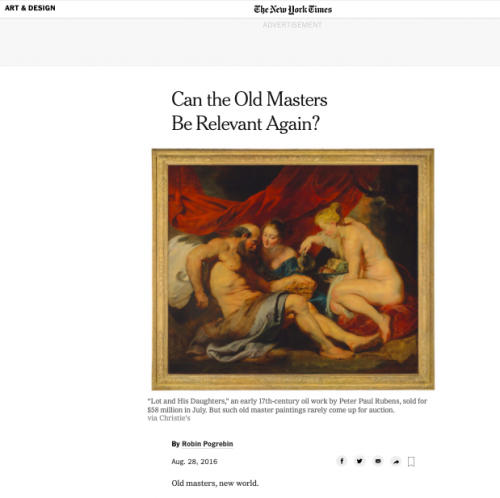 Can the Old Masters be Relevant Again?
Robin Pogrebin
August 28, 2016

At Christie’s over the last few weeks, two experts in old master paintings and drawings quietly left the auction house.

Their departures followed a year of spotty sales, in which the values of works by old masters — a pantheon of European painters working before around 1800 — fell by 33 percent, according to the 2016 Tefaf Art Market Report.

At a time when contemporary art is all the rage among collectors, viewers and donors, many experts are questioning whether old master artwork — once the most coveted — can stay relevant at auction houses, galleries and museums.

Having struggled with shrinking inventory and elusive profits, auction houses appear to be devoting most of their attention and resources to contemporary art, the most popular area of their business.

“They want to be associated with the new and the now,” said Edward Dolman, chairman and chief executive of Phillips auction house, who spent much of his career at Christie’s chasing works by old masters but now focuses on contemporary art.

“We have no intention of selling old masters pictures or 18th-, 19th-century pictures, because these markets are now so small and dwindling,” he added. “The new client base at the auction houses — and the collecting tastes of those clients — have moved away from this veneration of the past.”

A shortage of old master treasures, fewer up-and-coming old master specialists and public attention on the highest-selling pictures (which are in the contemporary market) are partly responsible for the shift in emphasis.

Last year, the museum started an online series called “The Artist Project,” in which contemporary artists talk about historical works at the Met that inspired them — like John Currin on Ludovico Carracci’s 1582 oil on canvas, “The Lamentation.”

“When you hear contemporary artists talking with passion about the genius of old masters — that, we assume, will help open up the historical fields to new audiences,” Thomas P. Campbell, the director and chief executive of the Met, said, “to understand that all art was once contemporary.”

This mixing of genres has been prominently tested at Christie’s themed sales, which include works from many different time periods.

“Perhaps they would rather put their resources into other, potentially more profitable departments,” said Nicholas Hall, the former co-chairman of old master paintings at Christie’s, who left in July, along with Benjamin Peronnet, Christie’s head of old master and 19th-century drawings.

While the Frick is eager to reach today’s audience, the museum is also wary of straying from its mission of showing classic European art and sculpture.

“A lot of museums are focused on a false dichotomy — if they get young people in through contemporary exhibitions they’ll stay and get interested in old masters,” said Ian Wardropper, the Frick’s director. “I just don’t believe it. The point is to try to reach them in an intelligent way on their own terms and make it interesting — and that’s not easy; we’re all struggling with that.”

In light of these developments, old masters have become a collecting opportunity. Printings and engravings can go for $4,000 to $5,000. While Orazio Gentileschi’s 17th-century “Danae” sold at Sotheby’s in January for $30.5 million, “that is less than a Christopher Wool and half the price of a Warhol,” Mr. Sainty said. “You can buy a really good Rembrandt for $40 to $50 million. That’s not a lot of money when you think about how many Rembrandts there are — and how many Jeff Koons.”